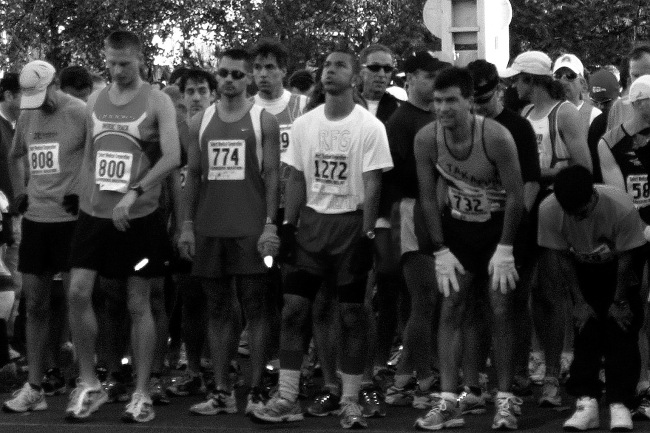 Harrisburg Marathon Start 2008 by the author

On Saturday morning I went out for a little 17 mile run. Sure, 17 miles seems like a long way. Further, I would guess than most people drive to work in the Northeast. Further than most people have to travel to a proper grocery store. But I was running it. And running it quite well for a 46 year old guy. As I ran, I started to contemplate how I got here. Who in the hell voluntarily runs 17 miles? I have never been an athlete but I have done the marathon distance before – twice. Why? Not sure about that. But the following is what I thought about during that run:

Over 20 years ago at the age of 25 I decided I was out of shape and aging faster than I wanted to. I started getting in to running. I went out and bought a pair of “cross trainers.” Now anyone who is reading this that considers themselves a runner knows that you can’t be a runner in cross trainers. I was green and in those days I didn’t even know what questions to ask. I started out humbly, not even able to run a mile. I bought my first pair of running shoes and eventually I got up to where I could run three miles without falling down. I thought I was in great shape. I entered by first 5K. 3.1 miles. I was an athlete now! I could do this. I ran 27:56. Which if you are not a runner is precisely 9 minutes per mile. I thought that was awesome. I got beat by old ladies and guys who had a hitch in their giddy up. I had no idea how slow I actually was. I was embarrassed and determined to get better. Eventually I ran a personal record of 22:47. Not many years after that first 5K, I read an article about training for a marathon. It didn’t sound that difficult. So, just a month after my 31st birthday I ran my first marathon and followed that up with a second marathon the following year.

So 14 years after that second marathon, what am I doing on a country road 8 miles into a 17 mile run and seemingly in pretty damn good shape? Well that is another story that will wait for another time but I did begin to contemplate what I have learned from running and why I felt relatively good for an old man training for his first marathon in over a decade.

So I’ll keep running, and asking, and answering, and learning

2 thoughts on “Running for Answers”