I started this blog four years ago thus the name 40phor. I’ve decided to maintain the name although the years keep adding up. I thought of 44 at the time as being a pivotal year in my life and, to be honest, every year since then has been pivotal. I think I grow every year. I’m still working on being a better father, husband, son, brother, teacher, leader and of course, writer. The last four years have been years of reflection that I had missed on my first 44.

Every year there are milestones and benchmarks. There are also difficulties and failures. Every year I try to identify my weaknesses and strengths. Every year I reflect on what I should be celebrating. For me, my birthday is a time to think about how I will make this year better than the last.

This year, 9/11/01 has been on my mind a lot. Like most people who were alive that day, there are still strong emotions each year. One of my first posts was about 9/11. And my second post ever was about Glenn Beck’s 9-12 project. I was pretty tough on Beck.

I still think Beck is an alarmist and a bit of a putz. I have read some of The Blaze and I can’t understand how a mass of people can believe every thing this guy writes when he only uses his personal feelings as resources.

I will admit that Mr. Beck had a point. In the days following 9/11/01 we were a different nation of people. We were all there for each other. There was much less divisiveness and much more love. After the initial fear wore off, more people cherished the important things in their lives. It was very scary as I recall but we were all in this together. We were a united nation.

What I don’t think many realize is that 9/11 has also led us to where we are today. When all that love and support wore off, politicians began to place one religion over another due to those responsible for the terrorist attacks. Our government started to put the safety of the nation above the freedoms of individuals. While the Christian Right pulled one way to claim the US for Christ, the hardcore left held on dearly to what they valued. Now, more than just freedoms and religions, every issue has become a fight between the left and the right. There really is no middle ground any more. There really are no seriously political moderates on either side. As much as liberals hated Reagan and the Bushes, they were way closer to the center than any of our current political righties. The left has countered with Bernie Sanders and Elizabeth Warren, spreading ideas that seem more associated with the 70s than the 21st Century. It seems you have to be extrem to be noticed. In PA, we are in one of the longest budget debates in Commonwealth history. Tom Wolf, probably more socially liberal than Ed Rendell, has put his foot down on his support of public education. The more fiscally conservative House has said it will hold the line. Apparently no room for compromise.

It’s painful for me to think that fateful day may have led to our current state of divisiveness in this country.

In that blog post on Glenn Beck, I posted 10 values and two principles.to strive for to counter Mr. Beck’s 12. I think they are probably even more relevant today:

I know, my liberal is showing but, it’s my birthday! 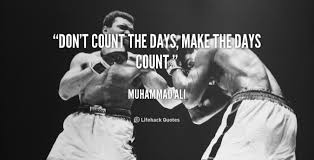 As has become tradition: my birthday blog post! This is the end of three years of the 40phor blog and the beginning of year four. I started this blog on by 44th birthday; thus the name. Although I’ve never posted as much as I thought I wanted to, the blog has been therapeutic and sometime cathartic. Although I don’t know how many readers I have, I know that at some points in the last three years I have touched someone, made them think, hopefully made them react, and possibly evoked an emotional response.

When I go back and read my own posts I am often impressed by my own writing as if someone else wrote it and at times rereading those posts remind me of who I was then and what experiences I was having. The ultimate goal of this blog was to get the constant thoughts out of my head and out to the world. Sometimes I forget that and keep the running dialogue in my head rather than sharing it with you. As always I will promise again this year to try to do better but we both know I probably won’t.

As for my year: some big events. My older daughter graduated from high school and matriculated at Temple University a few weeks ago. I ran a marathon, 4:02, for the first time in almost 15 years and ran a PR by 13 minutes. I lost a brother, friend and running mate. That’s three pretty big life events in one year.

For this year I hope to keep more consistent with the running and the blogging. I will finish my certification as a superintendent very soon so, who knows, maybe a change in employment also. Whatever the case, its just another year that I will try to make the best one yet!

Tomorrow I will post my goals for the year.  Today is my birthday.  9/12.  Pretty cool date.  As a fraction reducible to ¾.  Late summer but with fall like weather usually.  Pretty joyous occasion for me until Glenn Beck screwed with it.

Not that I ever was a fan of Mr. Beck.  His politics and mine are more than a little different.  Not necessarily polar opposites but definitely not in the same hemisphere.  But when Mr. Beck took my birthday and used it to promote some right wing propaganda, I was more than a little peeved.  For those of you who don’t know, here is the basis for Glenn Beck’s “9-12 Project.”  (absence of a link here is purposeful. I don’t want anyone else to get brainwashed.)

“At the origin of America, our Founding Fathers built this country on 28 powerful principles. These principles were culled from all over the world and from centuries of great thinkers. We have distilled the original 28 down to the 9 basic principles.”

It’s really hard to argue that any of those are unimportant, but I do have some hang ups:

First of all, the 28 principles are only what Mr. Beck believes were the Founding Fathers values.  Secondly, his 9 principles are clearly to promote his own as well as the Tea Party’s agenda.  Thirdly, why 9 principles and 12 values?  To exploit the deaths of thousands of innocent Americans for one’s own political/financial gain is the only reason I can see.  Unless he really did just want to screw with my birthday. So I’ll be a little passive aggressive; my own rewrites on what he really meant.

So, I’ve decided to start my own project.  Just to keep the theme alive I’m thinking of calling it the 2/10 project.  Here you go Mr. Beck:

Those are the principles and values that I would call my 2/10 project.  By the way, February 10th; Glenn Beck’s birthday.  Revenge!